August 15, 2019, marked the 250th anniversary of the birth of Napoleon Bonaparte. Despite his contradictory nature, he is undoubtedly one of the most significant personalities in history. Already many generations of French people are full of admiration, pride and unfailing interest in studying the life of “little corporal”, who became emperor. 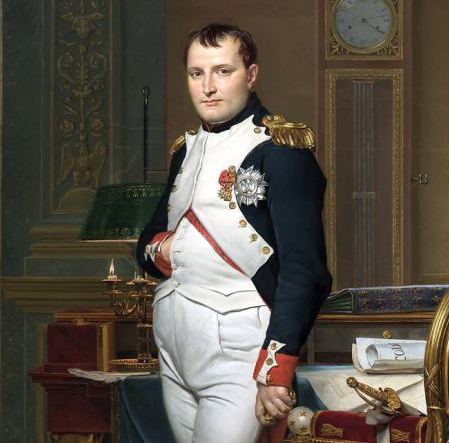 Jacques-Louis David – “Napoleon in his office.”

Was Napoleon a freemason? Historians do not have a document that could confirm this, but many undeniable facts prove the extreme closeness of Napoleon to Freemasonry. Moreover, it was thanks to Napoleonб Freemasonry spread in Europe and became a mass phenomenon. He turned Freemasonry from a secret society, as it used to be, into almost an official state religion, uniting all the French lodges around the Grand Orient.

Back in Corsica, Bonaparte grew up surrounded by Freemasons – after all, his father and all three brothers were Freemasons. There is no doubt that the family spoke about Freemasonry all the time.

It is not surprising that under this leadership, both military and civilian wanted to enter the ranks of freemasons at the earliest opportunity. Masons were twenty-two of Napoleon’s thirty marshals, five of the six members of the Imperial Military Council and six of the nine ministers in the government. 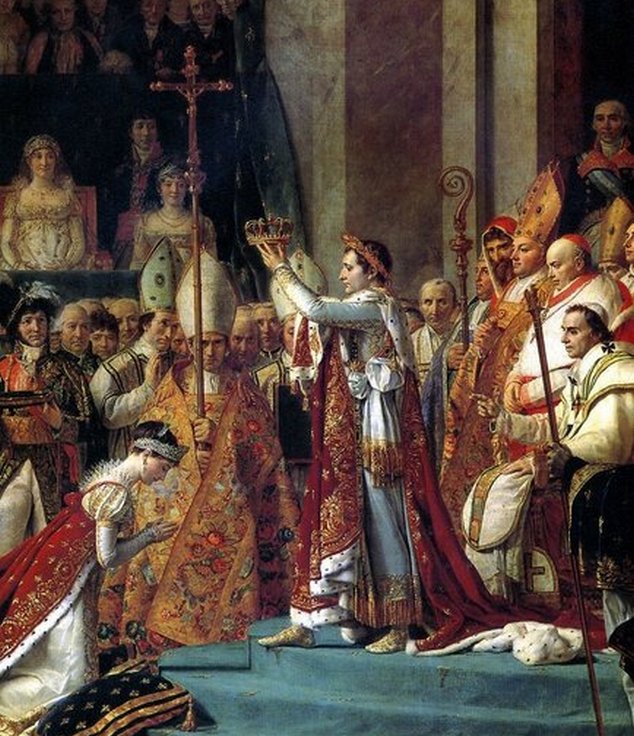 Jacques-Louis David – “Dedication of Napoleon I to Emperors and coronation of Empress Josephine in the Cathedral of Notre Dame in Paris on December 2, 1804.”

Bonaparte’s rule had become the golden age for Freemasonry in France. During the 18 years that he was in power, the number of Masonic lodges in France has increased from 300 to 1220, of which a large part was war Lodges.

In the Masonic Warriors Bonaparte saw a powerful means of uniting the army, an obedient and loyal tool, which was very useful in the context of his European ambitions. In the deployment of military operations in Europe, the international feelings that unite the brethren were beneficial to the conqueror.

The Brotherhood of Masons – Warriors responded to the Emperor with reciprocity. In many Masonic temples, the Emperor’s busts were installed, and any criticism of his rule was considered as an unpatriotic provocation and a severe masonic error.

In 1801 in Paris, The Bonaparte Lodge  was founded, which had as its main task the glorification of the Emperor’s name. The Lodge successfully survived the exile and death of Napoleon and was closed only in 1871. It was able to withstand the reactionary years thanks to the fact that it was prudently renamed into the Moderation Lodge. 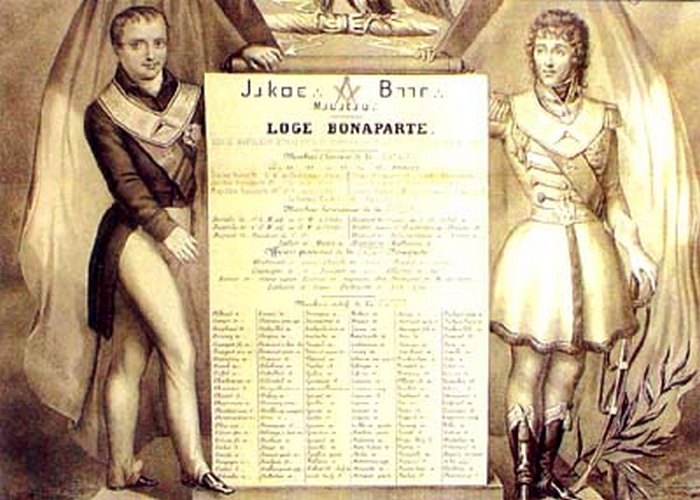 On the engraving with a list of members of the Bonaparte Lodge, Jean-Baptiste Willermose (1730-1824), who created a system of higher degrees of Freemasonry in France and Germany is standing next to Napoleon.

It was the military officers, Bonaparte subordinates, that participated in the Egyptian expedition which brought Freemasonry to the banks of the Nile. General Kleber founded The Isis Lodge in Cairo,  which, according to some researchers, was co-founded by Napoleon.

Why Napoleon, although making Freemasonry part of his government policy, did not want to directly participate in the work of any Lodge or even Grand Lodge? There is no doubt that if he showed even the slightest desire – he would immediately be offered the highest and most honourable title in the Order.

If we know Napoleon’s character, the answer to this question is quite obvious: it was not enough for him to be “first among equals”, he had to be “above” the equality. The Bonaparte family was descended from an ancient Florentine aristocratic family. Napoleon had every right to add the title of count to his family name, but he never took advantage of this opportunity. Such petty ambition was not for him. But he couldn’t let anyone call himself “brother” either.

For the same reason, Napoleon at one time renounced the title of Marshal – it was enough for him that he was the commander in chief “de facto”. Ranks and titles were not attractive to him in any way. Napoleon was only interested in real power, preferably absolute. Having received it together with the imperial title, Napoleon satisfied his ambitions. In this case, the imperial throne, he called “a piece of wood”, and sitting at the same table with the crowned royals of Europe, could afford to throw the phrase: “When I had the honour of being a junior lieutenant …”.

However, the emperor knew a lot about propaganda. When it was necessary to demonstrate the wealth and power of his empire, he was not stingy – his palaces were full of gold, and the court was the most refined and brilliant in Europe.

After becoming Emperor, Napoleon remained closely involved in Masonic matters. At the place of execution of King Louis XVI, he ordered to install an obelisk with a Masonic symbol – a five-pointed star. When creating a personal imperial heraldry one of the symbols of freemasons – a bee was used, which became Napoleon’s family symbol. 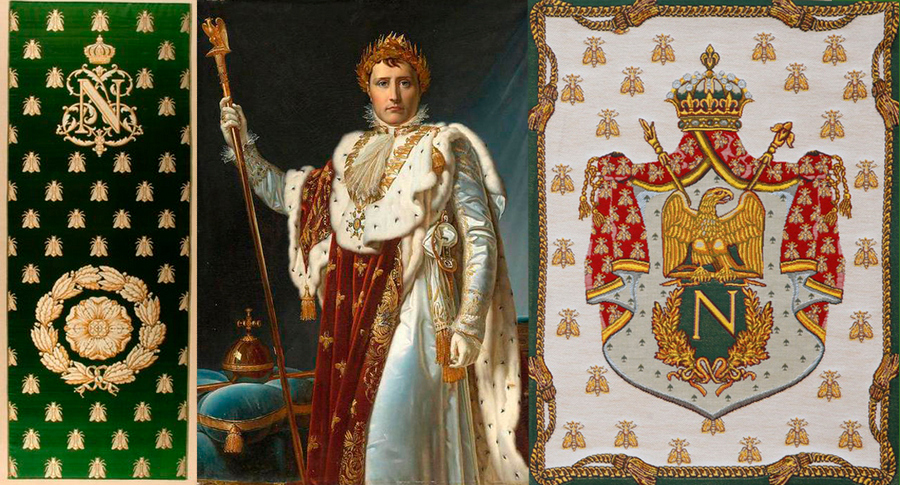 A special “Bee Mantle”  was made for the Emperor for the coronation.

The bee is a very old symbol. In Ancient Egypt, it accompanied the goddess Isis and had many meanings. For Napoleon, the bee meant a willingness to sacrifice for the country and the ability to rebirth.

The Freemasons also reacted to the appearance of additional meaning in the traditional symbol. There was even a Lodge called the Imperial Bee.

Since Napoleon’s time in France, the bee has remained a fashionable motif in jewellery, textiles and fashion. The Hermès handkerchief with Napoleon’s print was produced in 1963. Fashion designer Philippe Ledoux designed it.

Shortly after Napoleon came to power, on June 22, 1799, a memorandum of nine articles was signed between the two largest French Masonic Branches, establishing specific general rules. In particular, the Worshipful Masters were stripped of their exclusive privileges. A system for the election of officials was made mandatory for all freemasons, establishing a fully democratic order. Only a few Lodges in the Scottish Rite refused to join the memorandum.

Thus, a very assorted French Freemasonry became a united and homogenous system, which was entirely in Napoleonic spirit. Soon was published “The Freemasons’ Regulator” – a set of rules and rituals for the Lodges of the Grand Orient of France. The Lodges of the Scottish Rite also made appropriate amendments to their rules – it took them three years, however. As a result, the rituals still did not become identical, but there was a single Supreme Council of the 33rd degree, the decisions of which became binding for all. The Emperor could influence any decision, since, by that time, the Supreme Council was headed by his elder brother Joseph, who had become the Grand Master.

The 33rd degree Supreme Council, created at the initiative of Napoleon, continues its work today.

The “Freemason’s Regulator”, which unified the activities of freemasons, has become a document that organically continued Napoleon’s reforms, along with the Constitution, the Civil Code, the system of universal education, a single state award system (the Order of the Legion of Honour), etc.

Following France, the freemasons of other European countries began to bring their rituals into a single system. Marshal of the Empire, Freemason Jean-Baptiste Jules Bernadotte, who became Crown Prince of Sweden, reformed the Swedish Rite. The system of 12 Masonic degrees still exists today.

Friedrich Ludwig Schroeder, Grand Master of the Provincial Grand Lodge of Hamburg, inspired by the ancient rites of the Templars, developed his Rite, limited to three symbolic degrees. Today, it is being practised some Lodges in Germany, Hungary, Austria and Switzerland.

In 1806, to celebrate his triumph at Austerlitz, Napoleon, decided to build the Arch of the Triumph. A  team of builders and architects, entirely made up of Freemasons, was created to implement the project. Brother Jean-Baptiste Nomper de Champagny proposed the concept and chose the site for construction. The initial plan was designed by the architect Charles-Louis Balzac ( The Great Sphinx Lodge, Paris), it was completed by the architect Jean-Francois Chalgren (The Simple Hearts of the Polar Star Lodge, Paris). Freemasons created the bas-reliefs on the arch – sculptors François Rueud (north side, composition “Marseillaise”) and Jean-Pierre Corto (south side, composition “The Vienna World”). The official government architect, Maison Pierre Fontaine, supervised the construction. 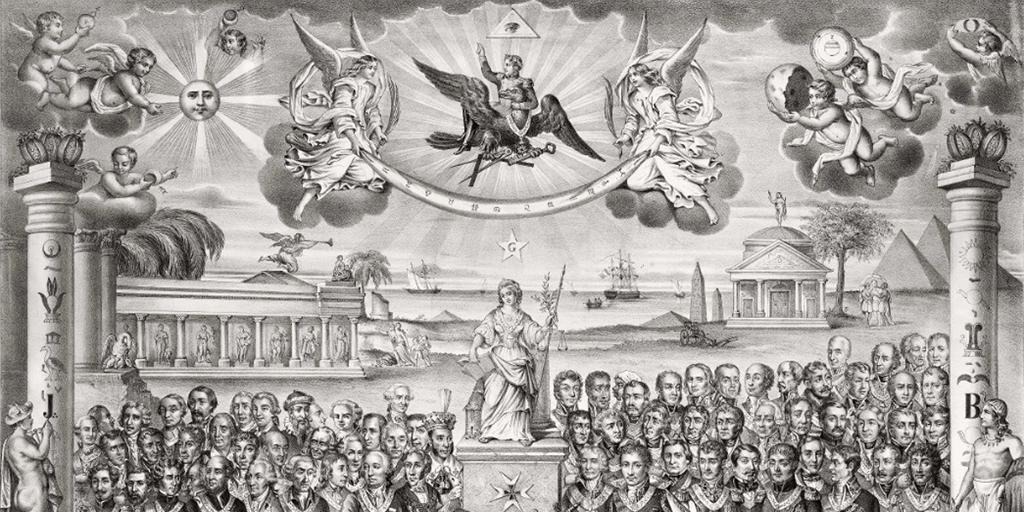 On the 1860 engraving, under the shadow of the Emperor, above whom The Eye of the Providence shines, there are 61 historical figures from his era. Among others on the left are Désé, Cambassaire, Kleber and the commanders Davaux, Lannes, Murat, Lasalle, Mathieu Dumas. On the right: Washington, Frederick the Great, Alessandro Volta, Diderot, Lased, Lafayette, Parmatier, Helvetia.

Following the military leaders, Napoleonic Freemasonry was joined by the most prominent figures of science and culture in France, the pride of the nation:

After the battle of Mont-Saint-Jeann, which went down in history as The Waterloo, Napoleon’s loss of power and his exile on the island of Elba, the great era of French war lodges came to an end. 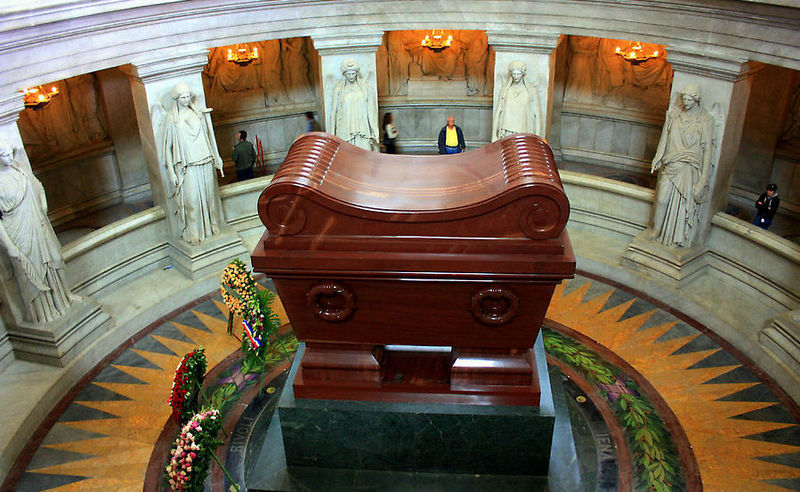 After 19 years since Napoleon’s burial on St. Helena, the remains of the Emperor were transferred to France and placed in the tomb in Les Invalides, in Paris. The red granite for the massive sarcophagus was presented to France by the Russian Emperor Nicholas I.

The restoration of the Bourbons and the persecution of the Bonapartists made the functioning of most Masonic lodges dangerous to life. However, even the disbanded lodges were not closed. According to Masonic tradition, they were only declared as “put to sleep”. “Sleeping” didn’t take that long. After the deposition of Louis Napoleon III and the proclamation of the Third Republic in 1870, The French Freemasonry experienced the second golden age, quickly remembering and reviving the traditions of the brilliant Napoleonic era. 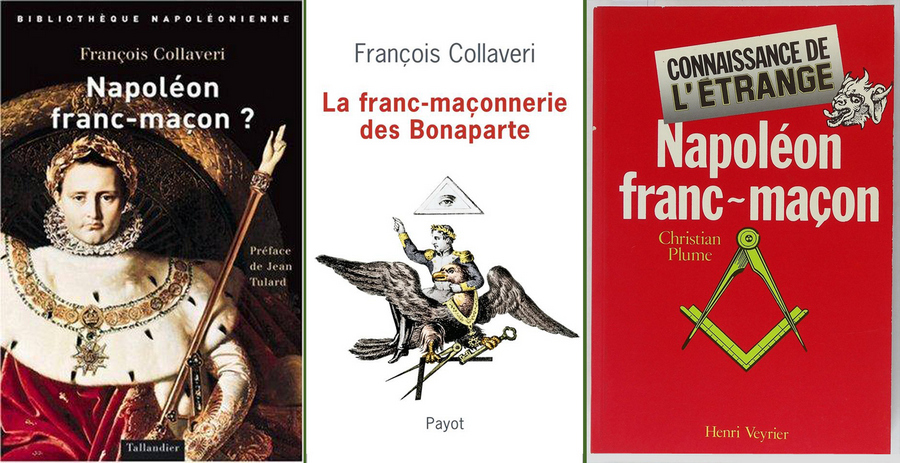 From books on the relationship between Napoleon and Freemasons, you can make a library. 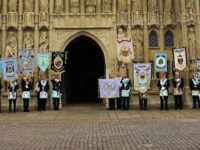 The current state of Freemasonry in Europe. 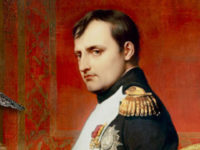 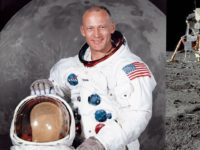 Freemasons on the Moon: a secret mission